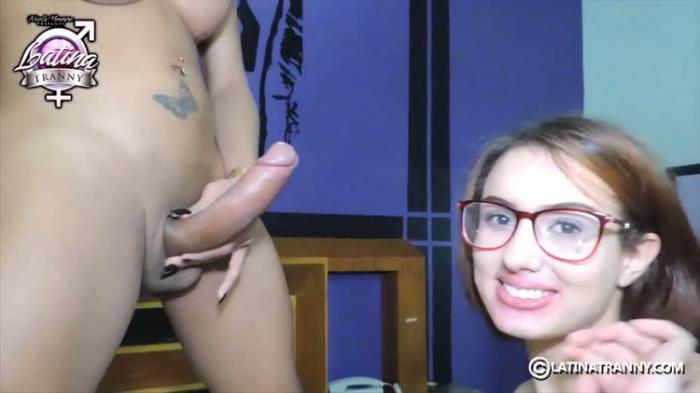 She Came in His Ass

Rosy is a passionate, tanned, tattooed, raven haired transsexual goddess with a muscular yet womanly, shapely body, an impressive joystick, and the classic big, round Brazilian ass. Her man would seem to agree, as he amorously kisses, caresses, and undresses her. Once he unfurls his steely shaft, she ravenously sucks it, shoving every stony inch down her throat with wolfish hunger. He reciprocates by sucking her impressive stony monster cock. Moving into a 69 for a mutual suck-fest, she fucks his mouth while sucking his dingus before having him lay flat on his stomach and dominantly plowing her instrument of anal destruction into his bunghole with fiery fervor as she makes him her bitch. Rolling over into spoon, she assertively drills her beefy battering ram into him with fury, making him moan and cry out as she formidably slams her horse cock into him with single minded purpose and ravages his ass. With her man-whore lying on his side, she kneels before him, barbarically pile driving her titanic tool into him with fierce, primal, lust-fueled fanaticism. Her passions a raging inferno, she then barbarously slams her donkey dick into him in doggie like an Amazon ravaging her conquest, and soon she’s pounding him like a jackhammer, exploding in a jaw-dropping, bestial, screaming orgasm as she deposits a hefty creampie that slowly oozes out. Being magnanimous, she sucks off her bitch’s dick until he blows his load as well, leaving both happily satiated.read more

Rosy She Came in His Ass